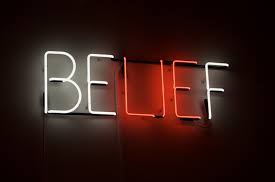 Beliefs. Wars have been fought, empires built, billionaires created, and mass suicides caused by the different beliefs people hold. I personally felt the power of unwavering belief a few years back, when I started a new social media platform called silOOette, which aimed to connect people in a more meaningful way.

I started with no funding, no experience, just unshakable belief in the idea. Never before, nor since, have I felt so focused and sure of success. For awhile my drive was unstoppable. I got a team together, we got funding and a place on an accelerator programme, we built a beta version, and started getting users, more people began to believe in silOOette too. But I had no idea how much money was actually needed, or the level of sophistication that was expected in the technology, or the required exponential growth rate of the user base. I made too many mistakes and my learning curve took too long, I didn’t have the skills, connections, funding or experience, and so I lost belief in my capabilities and the possibility we could succeed. And so when we ran out of money and belief, silOOette was no more! It was tough to let it go, but the biggest lesson that was burnt into me, was the power of belief…

Now, depending on my mood, and the day that’s in it, I look at the time I spent on silOOette from two perspectives. The first, and much rarer point of view, is that although silOOette never made it, it was still an amazing experience, I learned a lot and I really loved working on it. But most of the time I feel regret, regret that it failed and I failed, that I had been so naive to believe that it could ever succeed. And remorse that I let down the people that trusted and believed in me.

Since then I’ve tried to get that belief back, I’ve been searching for it. I’ve started new projects, but only half-heartedly, and often lacking belief in my own capabilities, or clarity in the project’s vision. Then in my darker hours I get worried about putting myself out there again, I fear failure and so I stop trying and the project dies. And so I prove my original belief in reverse.

Disbelief (in myself/project) + no action = no force (nothing happens, it feels like failure)

This reversal of the belief is its own negative feedback loop. It strengths the destructive, debilitating belief that I’m not capable, because when I’m feeling like I can’t do the things I want to do, then I don’t do the work, I don’t feel like it’s possible, or worth the effort, and so nothing gets done. And when nothing gets done, I feel like a failure and it feels like further proof in the belief that I’m not capable. It’s a vicious cycle.

If I’d never been lucky enough to feel and know the positive effects of believing you can, I imagine I’d feel completely hopeless right now. But due to my original belief in silOOette and learning from the other successful projects I’ve worked on in the past, I can always find hope. Those experiences have taught me the power of believing in myself and in what’s possible. But I also know how easily you can fall into a downward spiral, continuously reinforcing your disbelief in yourself, preventing you from continuing to try or even get started.

So how can you change negative beliefs about yourself? How do you break free from a negative downward spiral? I’m reading a great book by James Clear called Atomic Habits. In it he talks about identity based habits as a tool in becoming the person you wish to be. So for example, let’s say you want to stop smoking and you’ve made the decision to give up. The next time someone offers you one, don’t say “No thanks, I’m trying to give up smoking”, because in that case you still identity as being a smoker who’s trying to stop. Instead say, ‘No, thanks, I don’t smoke’, that way you are now identifying as a non-smoker.

It seems like such a tiny change but if we start by identifying ourselves as the kind of person we want to be; I’m a runner, I’m a kind person, I always get my work done on time, I’m healthy, etc. Then our behaviour is more likely to reflect that belief. Similarly we can adopt negative identities that we believe are truth, often without even realising we’re doing it; I’m a failure, I’m really bad at maths, I’m always late, I can never remember people’s names. We take these beliefs as fact and then act accordingly, reinforcing our belief in these made up stories about ourselves.

So step one is just choosing the identity we want for ourselves and not letting our negative self talk choose those identities for us. The next step is finding proof, and this step is key. You have to start super small, it’s consistency over time that allows you to build up proof and strengthen your beliefs.

So if you want to be someone who is fit and healthy and always goes to the gym, then don’t do a gruelling two hour gym session on January first and then believe yourself to be someone who hates the gym. Instead start super small. Every day decide you will walk to work, or get off the bus a few stops early and walk the rest of the way home. Make it super easy, repeatable and maybe even enjoyable. Then in a week or two you have the proof. You now believe yourself to be someone who cares about their health, and walks every day. This proof builds self belief and is the best motivation going. It’s self made and intrinsic to your self worth.

So this is what I’m going to do in order to cultivate my own self belief. I want to be someone who openly shares my thoughts and ideas. Someone that doesn’t give a fuck what others think about what I put out there, nor care about their judgement. I don’t want to put things out there for any particular goal or on any specific timeline. I just want to do it for the love of doing it. And maybe with the potential to connect with others, people who might resonate with my ideas, maybe make someone feel good or understood or not so alone. And the proof I need to believe I am that person? Well that will come over time, if I continue to show up and take action.